Written by Clyde Carroll on September 8, 2020. Posted in Fashion Shop

Abraham’s tailors have been trading on South Anne Street since 1981 but have a history in men’s fashion that goes back even further than that. As we chat with owner Declan Abraham, who has been outfitting the sharpest men in Dublin for almost 40 years, he tells us about his parents who introduced him to the business. 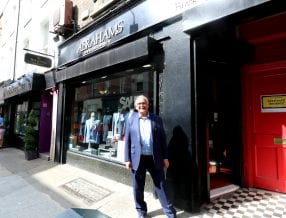 Declan’s parents (his father from Cape Town, South Africa, his mother from Co. Cavan) met in London where his father was learning his trade at one of the city’s top tailoring academies and his mother was working for Jaeger, the British clothing brand famous for their knitwear. After they’d married they came to Dublin and in 1966 opened their first bespoke tailoring business on Parliament Street before later moving to a premises on Capel Street. Here they grew the business, providing tailored suits to the legal profession from the nearby Four Courts, as well as to the general population of Dublin.

In the late 1970s the family started working with Córas Tráchtala (a state body, now part of Enterprise Ireland, whose job it was to promote Irish goods abroad), making luxury coats and jackets for export to some of the top fashion houses in London and Paris. While the coats were a huge success, quickly the Abrahams realised that their handmade products were selling for huge mark-ups in the boutiques of Europe. 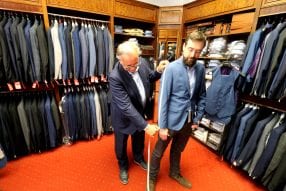 This proved the catalyst for the business to expand away from just manufacture and bespoke tailoring and for the first time into direct retail. The task of setting up the family’s first retail store was entrusted to a young Declan (only in his early 20s at the time) and he outlined how difficult it was to get a shop to let in Dublin, with huge competition resulting in them being outbid on a number of premises, before eventually securing the premises on South Anne Street that they still trade from today.

They began selling suits of their own manufacturer (by this stage Declan had himself trained in France as a tailor) and were hugely in demand, so much so that they took the decision to start selling other suit lines in their store, mixing bespoke tailoring with ready to wear suits.

While the times and fashions have changed there is still a demand for bespoke tailoring and according to Declan while men are buying fewer suits they are investing more in better quality suits. 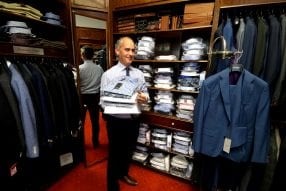 The store has kept its fair share of celebrity clients over the years but Declan remains discreet about naming names, and given their location in close proximity to Government buildings there are plenty of politicians, past and present who have had their suits made in Abrahams. They’re doing a solid line in wedding suits as well as their stock in trade business attire. Bespoke tailoring remains their heritage and Declan proudly boasts that they have over 4,500 suit patterns to choose from, with the customer able to pick everything – all the way down to the lining of the outfit.

Next time you’re around Grafton Street swing by they’re bound to have something made to measure.

5 Reasons to Volunteer at the DublinTown Fashion Festival 2018

Skinfull Affairs are Hosting a One Day Microdermabrasion Discount!